The Best Ways to Track Your Crisis Management and Preparedness Plans

The Best Ways to Track Your Crisis Management and Preparedness Plans

Last week, a county in metro-Atlanta experienced a water main break on a major highway. While AchieveIt headquarters wasn’t impacted, more than a few employees who live in the surrounding area had to show up to work unshowered.

I turned on my faucet that morning to find that the water had been shut off in the whole county. I brushed my teeth with a bottle of water, spritzed on some powerful perfume, thanked the genius who invented dry shampoo, and as I drove into work, I thought about how we were all able to continue to function.

I drove past a Starbucks and witnessed the line of cars queued up to feed the community’s caffeine addictions as usual. Police officers were rerouting traffic around Buford Highway, which was flooded due to the pipe burst, but people were still able to get to work (relatively) on time. I even crept past a Waffle House with a full parking lot, only to find out later that they were offering their world-famous “no water” menu and heavily relying on hand sanitizer.

After a long day of trying not to raise my arms in meetings and hoping no one got close enough for an accidental whiff, I learned that my water was back on – but we were under a boil advisory. On the way home, I found that even our grocery store, Publix, still had enough contained water stocked on the shelves to provide potable water for the community.

All of these organizations were prepared for crisis management. The county, utilities, and law enforcement entities were able to follow an emergency protocol to communicate to local media outlets. The media was then able to quickly adapt and follow their agile process to get the news out quickly to the community at large. Then, local businesses and those that are part of larger chains were able to tap into their preparedness plan checklists to continue to go about their operations as usual (mostly).

This got me thinking. Flawless incident response is only possible for those organizations who actively manage their preparedness plans and training. Without tracking ongoing preventative measures, how can any organization know whether they’re prepared to manage a crisis when it does come to the surface? 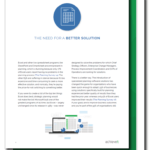 GUIDE – HOW EXCEL IS KILLING YOUR PLAN
Read this guide to learn the not-so-obvious dangers of using Excel for strategic plan management, and how to find something better.

Below are 3 things to keep in mind to most effectively track your preparedness plan and help you respond to incidents with more agility.

1. Set Up a Plan Just to Train for Preparedness

We all remember tornado drills in elementary school. It was a time to cut up and giggle with your head between your knees while your spine lay open and exposed to everything that would inevitably fly down the cinderblock hallway. But, you had a textbook over your head and neck, so you would be fine. Probably.

Whether or not this was a great plan (I do hope they’ve since updated the safety protocol since the 90s), we practiced. We ran the drill every couple of months. If the moment were to arise where a funnel cloud actually touched down, we would be prepared.

Setting up a plan to train for preparedness is the first step to successful crisis management. Just outlining what your organization would do in the face of an incident is not the same as running your employees through the protocol regularly. While it may be groan-worthy, physical training is imperative.

For instance, imagine you’re in the HR or Facilities office of a brick & mortar company with multiple locations in Florida. You may need to prepare for how to communicate a location closure due to a hurricane, both internally and to the community the location serves.

You have the steps outlined in an incident response plan, but has your company walked through the steps before?

Dedicating a plan to training for emergency preparedness alone will ensure you’re focused on a better outcome. Having a crisis management plan and never practicing it is the equivalent of sending a passive aggressive email about cleaning the office microwave that no one will read.

2. Have a Way to Track Benchmarks and Implementation Across Locations

If you’re already at a place where your company is emphasizing the actual training of incident response, think about how you’re going to keep up with seeing when or whether the trainings have taken place, and at which locations. Are you able to view these updates at a glance on a ready-made dashboard? How do you see the context around how the trainings went?

For example, a lot of food manufacturing companies are susceptible to dealing with food safety incidents that often also require a reputation management response. A big incident like a salmonella outbreak can involve actions from employees in PR and Marketing, Operations and Warehouse Management, and most all departments in between.

For incident responses, the measurables are usually binary (yes this was done/no this was not done). While this may sound easier to track in multiple Excel or Word documents, it is better to use software that allows you to have one, single place where you can have collaboration around the steps taken to respond to the incident. Having a historical record of what you did, and the fact that you did the right things to respond is invaluable. Using a task management system or spreadsheet won’t have the same history or conversation around it.

Many of these organizations also track adherence to safety and health issues on a regular basis. With the ability to report and benchmark along the way on a regular cadence, some of these issues could potentially have been detected earlier. Just being able to track that a measurement was taken at a regular interval, or confirmation that an action was taken are vital metrics that executives of larger organizations need visibility into. On the other hand, for something like safety protocol implementation, CEOs don’t need to see the checklist of every item for every store – but rather an overall view of the percentage of stores at which something has been rolled out.

As an example, Marketing’s response to crisis management might consist of 5 major steps: e.g. 1. Scanning the internet and social media for feedback, 2. Crafting a press release and getting approval for dispersal, etc. But, there are several smaller activities associated with each of those bigger-picture tasks. To this point, these actions might all align with Marketing’s overall initiative of brand management, and their goal to have a net promoter score of +55 by the end of the year. Then, that Marketing initiative may fall under of the company’s overall goal of increasing their customer referral revenue.

Employees are more engaged when the activites they’re tasked with have a much greater value at all levels of the organization.

Once your overall plan is built out to avoid risks, it will be easy to create customizable process templates for any kind of incident response. Having a standardized program that has been rehearsed, implemented and tracked across locations, and tied to overarching business goals is a foolproof way to make sure your company is prepared to respond to any situation.

Keeping the above best practices in mind while creating, implementing, training, and tracking your incident response an preparedness organization-wide, you can rest assured that you, too, will have your own “no water” menu.

Be prepared so you can execute confidently when the undesirable happens. The loss of response time is the most costly part of any crisis management. When you know who is responsible for what and by when in the event of an emergency, you’re more likely to move swiftly and more tactfully to get back on track. Learn how AchieveIt can help you with this.

And, I’ll have y’all know, that my incident response to spilling a can of lime La Croix all over my laptop while I was writing this post was aided by my preparedness plan of keeping a box of tissues right next to me for this very reason. Suddenly all those “grab and wipe” drills I had run were all worth it.

Stay safe out there.