The importance of practicing addition and subtraction in your work life is the pinnacle of working smarter, not harder. When we introduce something new, we must also give permission for something to be taken away. Our resources need to have the capacity to grow and focus on what’s most important to our whole organization, rather than squandering time and money just trying to keep plates spinning.

While we can all agree on the value of this exercise, I don’t want to oversimplify the subtraction part. When you start to think about what it is you want to take away, the reality is – it’s not easy to figure out exactly what you should and shouldn’t quit.

A Brief Explanation of the Quitters’ Landscape

I recommend reading The Dip: A Little Book That Teaches You When to Quit (and When to Stick) by Seth Godin – or at least this summary. In the book, he simplifies what to quit and what to “stick” by drawing out two simple curves – the Dip and the Cul-De-Sac. 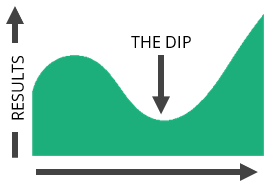 In short, the Dip is what happens after the excitement of a big implementation wears off.

When you start something new, excitement is high, investment and attention are oh-so-focused, and ultimately, it’s fun to work on. You’re learning very quickly and seeing fast results.

Eventually, your growth slows. You realize how far you have left to go to reach your goals. You become less engaged.

Then the paperwork and tedium hit. Your new initiative or goal becomes more chore and less hobby. It’s the difference between learning to make a good pancake once and being able to make perfect pancakes every time.

The Dip is a sieve that filters out “The Greats.” The people who make it to the other side are few and far between – and that’s why they’re “The Greats.” 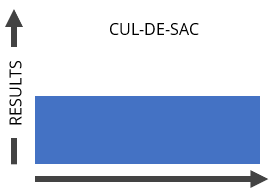 The Cul-De-Sac – or quite literally “dead end” – is where organizations who never quit get stuck.

Wait – above we just talked about how pushing through the “long slog between starting and mastery” is rewarded. They’re not quitters.

Yes. But on the other hand, teams that just keep saying yes become over-operationalized and over-worked. The result? Constant work where nothing gets worse or better. It’s just sucking up time, budget, and innovation from initiatives that could really set you apart if you had the resources to invest.

The point – you need to recognize which risks you have the opportunity to win and push out of the Dip, and which initiatives are keeping you from doing other more valuable things

Maybe, Let’s Not Actually Do This

The Dip and the Cul-De-Sac are so important in plan execution. We spend so much time crafting and fine-tuning our strategy, that we forget our plans are essentially a series of bets we’re making about the future.

We don’t have a crystal ball. Without the luxury of being able to see into the future, we have to accept that some of the bets we make aren’t going to pay out the way we thought they might – but we don’t know which ones. However, we can still multiply our investments by focusing on the things that will push up and out of the Dip, and forget the plates we’re spinning on the Cul-De-Sac that are stealing energy away from developing our true differentiators.

So what I’m saying is, instead of classifying “losing a bet” on an initiative that isn’t showing results as a failure of our personal character, we should embrace it – and then quit. Remove our pride along with the resources backing the initiative, and double-down on one of the bets that is shaping up to be a winner.

There are a couple of things you can do as a plan leader to help start to cultivate the idea of subtraction as a good, necessary, and healthy part of a change-oriented mindset. i.e. You need to 1) Diminish the stigma, and 2) set up a system so you can easily see what to quit.

That’s right. I said it. Quit.

I’d be remiss not to address the elephant in the room when it comes to quitting. The word “quit” and the act of doing so has such a unique place in our culture. We’re taught from a very young age that quitting is essentially bad and has no place in our society. Remember those motivational posters lining the walls of your elementary school classroom? “Winners never quit and quitters never win,” with some cheesy picture of a baseball player or skydivers or something – right next to the one with the kitten dangling from a branch shouting, “Hang in there!”

Seth Godin aptly classifies anti-quit propaganda as bad advice. In his book The Dip, he says, “Winners quit all the time. They just quit the right stuff at the right time.”

Godin’s stance is that “strategic quitting is the secret of successful organizations.” He later on includes the quote from Peter Drucker, whose work founded the philosophy and practical execution of modern business, “One should waste as little effort as possible on improving areas of low competence. It takes far more energy and work to improve from incompetence to mediocrity than it takes to improve from first-rate performance to excellence.”

In other words, if you actually quit what you’re not-so-great at, you can make more room to really invest in your key differentiators.

Once we’re able to move past the cultural faux pas of quitting, we start to realize how important it is when it comes to building a healthy change management mindset.

Start the conversation in your organization to try and dissipate the general terror surrounding being seen as a quitter. Highlight instances where appropriate time management has led to big wins, even if it meant dropping other initiatives down on the priority list. Your team has to see it to believe it.

How to Set Up Your What-to-Quit System

You likely collect plan updates on a spreadsheet with a column dedicated to something that indicates status. AchieveIt (though absolutely better for plan leaders than a spreadsheet) uses a couple of default statuses to give the overview of the initiative line item: On Track, Off Track, At Risk, Achieved, Not Achieved, and Canceled.

You’ve got to use these statuses truthfully.

Because quitting feels like an unnatural defiance of our American values, we’re more likely to mark something “Off Track” and deprioritize the project that isn’t currently working out – just so we don’t have to wear the scarlet letter Q on our chests.

We keep kind of working on it, but it’s stuck in the Cul-De-Sac taking up mental space, hanging over our head like a heavy cloud of guilt. This fear to mark something At Risk, Not Achieved, or Canceled dooms us to a life that lacks the clear focus we need to stay ahead in a chaotic and competitive market.

It’s actually better for you and your team to ignore the sunk costs on those projects you can’t – and more importantly, shouldn’t – turn around, quit them, mark them Canceled, and move forward with the bets that are materializing to make the organization better.

This is why at AchieveIt, we constantly praise our customers that have items within their plans with a Not Achieved or Canceled status, rather than all On Track or Achieved. This warms my little quitter heart because it means they’re using AchieveIt to actively evaluate and adjust their bets based on the results they’re seeing, in real-time.

These are AchieveIt superstars and while I wish it was the norm, I still see some customers whose plans are a sea of green. We call those plans “watermelons” because they’re green on the outside and red on the inside, i.e. everything looks great on the surface, but we’re really in trouble in certain places, but too afraid to show it. Watermelons are dangerous because you don’t know where your real issues are, what to quit, or where to invest.

Knowing What and When to Quit Gives Huge Returns

Because of the very well-known research from Fortune Magazine, we know that 1 out of 10 strategies are effectively executed and if that isn’t convincing enough, in a Harvard Business Review surveyed, only 32% of global executives claimed to be good at execution.

The odds are against you.

But if you avoid a “watermelon” plan tracking system, you can easily spot and quit the initiatives that aren’t panning out, and invest time and effort in rising up out of the Dip to define your key differentiators.

Take pride in knowing your decisions to quit are actually a healthy form of resource management and innovation.

Actually getting key initiatives across the finish line is only made possible by sometimes deciding, let’s not actually do this.

The Importance of Conducting a Retrospective on Your Business Plans

Join other strategy leaders to problem solve, network, and bridge the gap between strategy & execution.

The Difference Between Goals, Objectives, Strategies and Tactics

Everything You Need to Know About SMART Goals

HEAR DIRECTLY FROM OUR AWESOME CUSTOMERS

SEE FIRST-HAND WHY THE WORLD'S BEST LEADERS USE ACHIEVEIT

What Is the Six Sigma Methodology?

Stay in the know. Join our community of subscribers.