Strategic planning failure occurs when businesses cannot identify and solve issues surrounding disruptive software systems to achieve their corporate goals. Businesses experience strategic planning failure on many different levels, including large corporate scales, like when a merger fails, or on more specific individual levels when team members cannot value or support one another.

Hewlett Packard (HP) is a technology company specializing in hardware and software development. At their prime, HP oversaw the development of computers, printers, and software.

In 2002, CEO Carly Fiorina merged HP with another technology company, Compaq, to form HPQ. However, the merger occurred without allowing employees to adjust to each other’s company cultures, leading to mistrust and lack of support across all company levels. Neither company had the time to compare and sync their system software to find where they were compatible and needed to make adjustments.

Planning failures don’t have to define a company — many businesses can move beyond them if they learn from the experience. Now, HP is primarily known for its printer technology, but the company recently transformed what could have been a business tragedy into a growth opportunity.

Xerox Holding Corporation offers document goods and services in both digital and print formats. In 2001, after suffering financially for a couple of years, Xerox appointed Anne Mulcahy CEO in hopes that her enthusiasm and drive could turn the business around.

While the company made strides under her leadership, previous federal investigations hurt company performance and made it challenging to implement new improvement strategies. Management’s poor legal and ethical choices, which had roots in weak core company values, led to Xerox’s business strategy planning failure.

Cisco is a telecommunications and networking company that offers goods and services for software and hardware technology. In 2011, they announced a new product that required targeting a new market instead of focusing on a product fit for their existing one. The lack of strategic planning cost over 6,500 employees their jobs and hurt the company’s financial performance.

Unum Group is an insurance provider that merged with Provident in 1999 to form UnumProvident. Under this merger, they became the first insurance company to offer group disability coverage as a part of employee plans.

They are a company whose strategic planning failed, as they spent large sums of money on training and integrating the systems and cultures of the two companies. The two environments were too different, creating significant dips in UnumProvident stock and the break of the merger in 2007.

Motorola is a communications company that specializes in phones that tried to market luxury cellphones in 2009. However, due to the strategic planning failure, investing in this kind of technology and market caused Motorola to lose millions. In 2014, Lenovo, a computer company, bought Motorola and still owns the brand.

In the 2008 housing market recession, Green Tree Financial, a mortgage financer, experienced great losses due to the market crash. With backing from the Lehman brothers, the company used aggressive marketing tactics to improve business, leading to legal consequences. Conseco, a financial firm, bought Green Tree to help put the business back on its feet but instead led to Green Tree Financial declaring bankruptcy due to strategic planning failure.

Download this guide to understand how organizations who establish uniformity, create visibility, and promote accountability excel at execution. 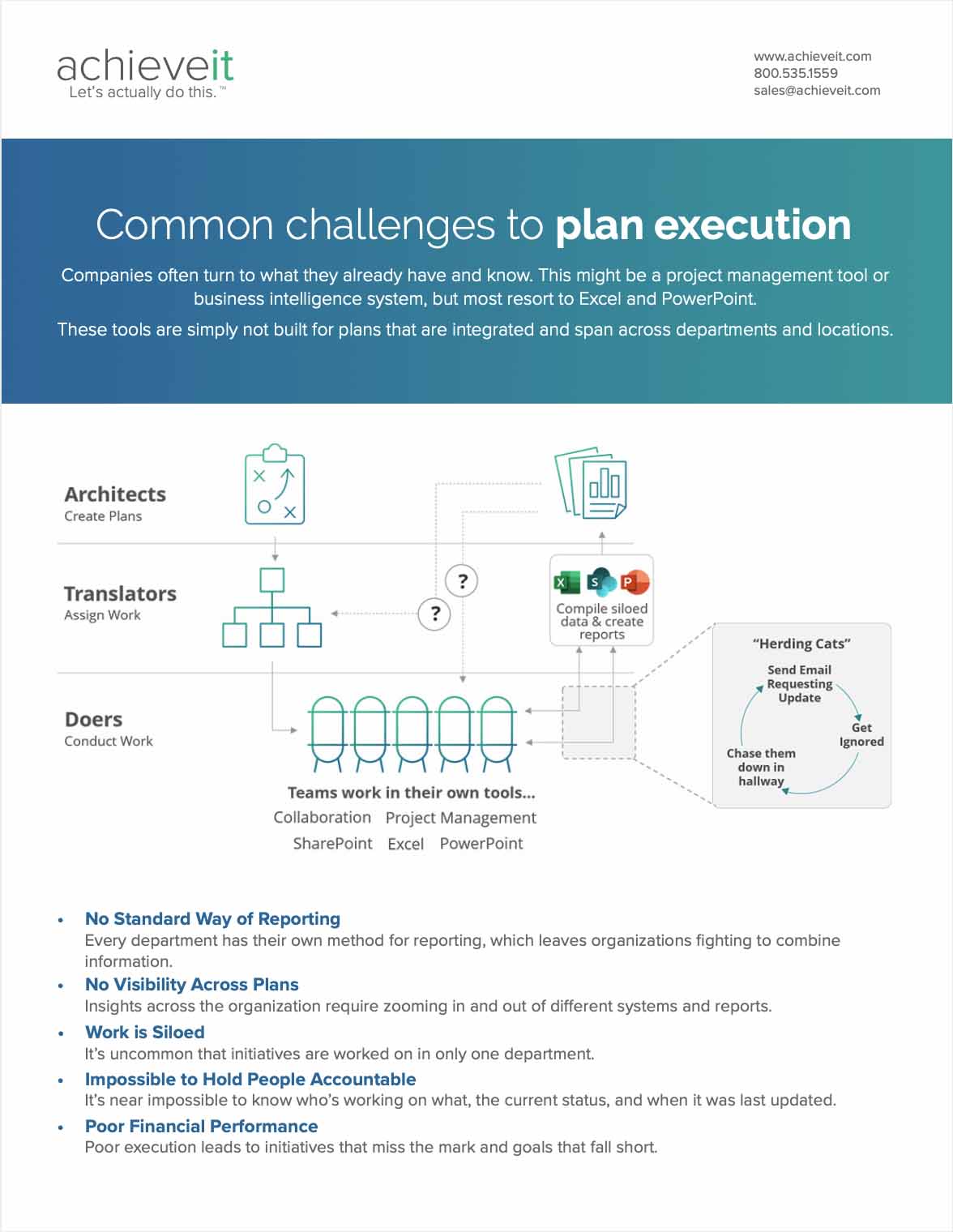 While Cisco and Motorola’s strategic planning failures preach caution when investing in new technology, Kodak is the opposite. Kodak, a camera company, lost business and sales in the rise of digital cameras and photos when they didn’t invest in the new technology. Because of this, the camera market took off without them as customers wanted newer models and chose competition.

WorkerExpress is a company allowing customers to contact construction workers to hire by the hour directly. However, without research and planning, they didn’t realize there was little market for this. The company had to change its approach to business to instead work with construction contractors directly.

Schlitz Brewing Company is a beer brand based in Milwaulkee that argued that their product made the city famous. They experienced business strategy planning failure when they tried to change their brewing process in 1967 to cut productions costs. The public did not receive the change well, and it changed how people viewed their brand and products, causing another company to buy Schlitz in 1982.

Instead of strategically forming a plan to cut production costs, Schlitz sacrificed the quality of their product, leading to the rejection of their beer by the public.

eBay is an online auction site where companies and individuals bid on products. eBay represents another strategic planning failure example where a merger was the cause.

In 2005, eBay decided to merge with Skype, thinking it would enhance their business. However, the values and systems of the two firms did not integrate well with each other. In 2009, eBay reversed the merger but already experienced significant decreases in stock.

Iridium Satellite Communications is a global communications network whose investment in technology did not have the desired effect on the public, who rejected their phones for being too expensive. Because the company failed to plan for this reaction, Iridium did not find the public success they were hoping for.

UPS, a shipping company located in the U.S., rolled out a new shipping initiative during the holiday season in 2013 with a promise to have all packages delivered by a particular time before the holidays. However, the company did not anticipate the high demand that would follow this plan, which overwhelmed workers and delivery teams, causing large amounts of packages to arrive later than promised.

UPS did not deliver its promises, and they bought new planes and trucks to execute their plan. They did not recognize the logistical difficulties in training new staff for their delivery promises, all of which hurt the company.

Learn How to Prevent Strategic Planning Failure With AchieveIt

Failure to plan strategically can drastically change a company’s history and trajectory. When setting goals and plans for your business, it is best to account for the unknown circumstances that might arise, such as market reaction and merger costs. By planning for the future, you can best prepare your business for problems and have a plan for handling them.

With AchieveIt, our software systems can help your company manage and implement business plans and initiatives. Test AchieveIt’s certified strategic planning software to improve how your company reaches its goals.

Ready to improve your plan execution?

Organizations of all types leverage AchieveIt to connect, manage, and execute their most important initiatives. Replace manual processes & siloed systems with interconnected plans in a single, automated platform.

GET A DEMO
SEE HOW IT WORKS

How Do You Overcome Strategy Failure?

How Do You Overcome Strategy Failure?

Fill out the form below to get your free guide to Common Challenges to Plan Execution!