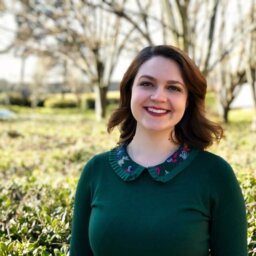 Myra Ricceri is the reigning “AchieveIt Queen” of CHI Health.

The Performance Excellence Coach Coordinator earned her nickname from the project teams in the health and hospital system based in the Midwest. Within the first few months of implementing AchieveIt for organization-wide project tracking, Myra led the team to knock out a 6-month long project in 23 work days and cut their number of meetings in half.

Myra Ricceri has received many project management awards from the Project Management Institute (PMI) and Planetree for her work in overseeing the design, openings, and operations for 6 hospitals and other specialty facilities and programs. A PMP, CLSSGB, FLMI, and ACS by trade, Myra has since transformed the way her organization monitors and measures their projects, leading to even more success since the first TSC certification project.

We were thrilled when Myra shared her story with our webinar audience. Below, find some highlights from our conversation on how Myra’s new best practices help her team at CHI Health make better decisions to accomplish more. Or – access the webinar video recording here.

There are 15 hospitals in our organization and it’s the story of one of those, that’s the focus of what I’ll be sharing today. My team and I lead the major undertakings for CHI Health. We’re involved from both the change management and the project management perspective. We all have some level of Lean Six Sigma certification, so we’re always looking for better, more efficient processes to support our organization.

Before AchieveIt, spreadsheet reporting was done manually and many times by multiple hospitals. Sites could take some liberties to add columns, change the formatting, etc., so we no longer had a consistent look and feel for our reports.

“How AchieveIt Saved Our Process”

AchieveIt helped Myra’s team at CHI Health develop one version of the truth from a lot of varying sources that measure KPIs differently. Databases and financial programs produced discrepancies in information that are now solved when her team members update statuses in AchieveIt.

So, let me break down for you the three phases where AchieveIt was my best friend, and I think could be yours. 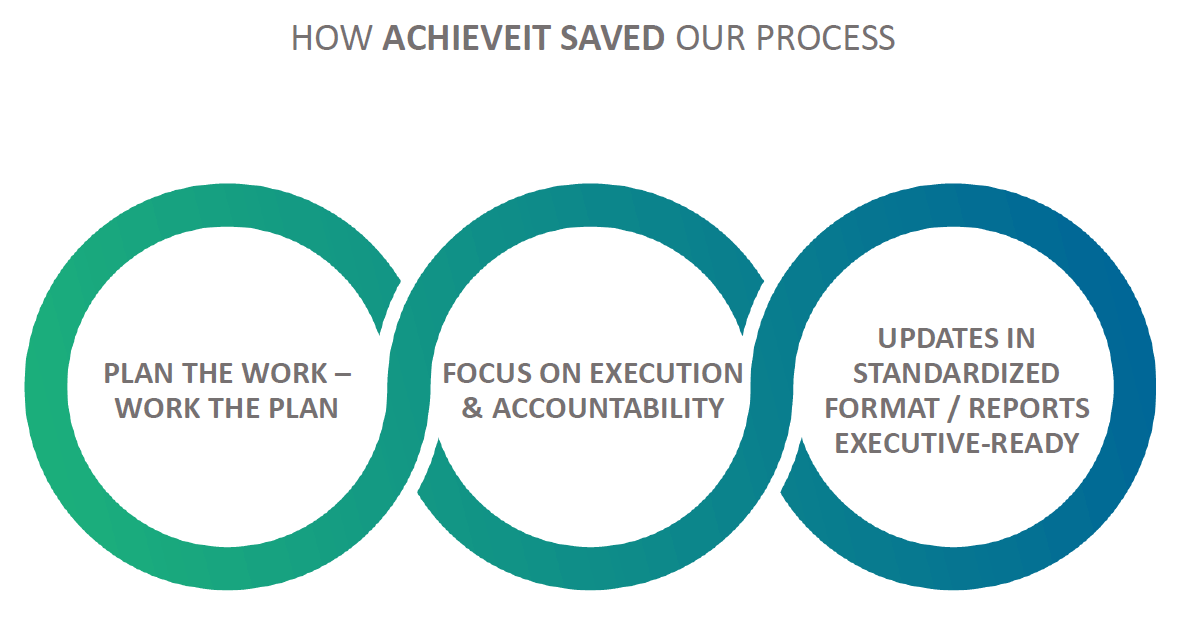 First – plan the work. The to-do list was basically done for us; the certifying body had 84 requirements. We just had to determine who was the best resource to pull together the documentation of proof that we met each requirement and the timeframe under which we had to do it.

After that, we just had to be diligent about working the plan. AchieveIt helped us stay the course when it came to execution and accountability.

One of the features that I love about AchieveIt is that one – and only one – person can be assigned to an item. We all like to work in teams at CHI Health and give everyone credit for helping, but when it comes down to it, there just needs to be one person accountable. It’s kind of like on Family Feud when they try to steal from the other family: only one person is accountable for relaying what the entire family agreed to as their guess.

And in the area of reports, AchieveIt let me build a dashboard that was updated in real time.

So, in my role, I work with a lot of folks who want to be told just the facts. Building a dashboard in AchieveIt takes just a few minutes and it really does tell the story. At a glance, the project sponsors can tell how things are going or how a metric is trending.

I had two sponsors for this project, the Neurology Medical Director and the President of the Hospital. With our AchieveIt dashboard, I was confident that they were both getting the same information and I really didn’t ever have to provide a status report.

The team at CHI Health used alignment as a tool to a) ensure every task supported a main goal and no resources were wasted on superfluous activities, and b) to enhance buy-in from team members, since they could better see how their work rolled up to the overall certification goal.

Myra also created a realistic timeline for their project work using a Gantt view and working backwards from the certification goal deadline. While teams often fall victim to the Planning Fallacy, Myra used AchieveIt to allocate everyone’s time and effort on a scale for success. This helps level resources and avoid road blocks, helping deliver the final project on time.

Perhaps the biggest benefit of using AchieveIt that the team saw was the reduction in meeting time and increase in meeting effectiveness and accountability. So much time used to be spent compiling reports manually and preparing meeting agendas for items to be discussed, that the amount of time saved exponentially increased productivity.

I never ever created a formal meeting agenda. Instead, I just used the AchieveIt filters to show only the items that needed attention, things that were not done when they should have been, or no update was given. The team knew this methodology would be used after our kickoff meeting and they knew they could use the meeting to get unstuck if they were struggling with something. But they also knew they would be called out if they weren’t progressing according to the plan we’d put together.

So, I’m very happy to report on the change before AchieveIt and with AchieveIt.

If I had not been using AchieveIt, I would’ve had weekly meetings. They would have been scheduled for an hour and some of them would have run over. There probably would have been a meeting after the meeting. Not all key attendees would be present at every meeting because of conflicts. I would have prepared agendas and typed up meeting notes afterwards, and quite honestly, the majority of our face-to-face time in the meetings would have been a lot of good discussion and brainstorming, but really no results coming out of that.

Now contrast that with AchieveIt. I only held four meetings, every other week, on this project. They were scheduled for one hour, but we often ended early. The updates were put right in the comments on each plan item. And remember – this was Christmas and Thanksgiving time – so I didn’t have everybody physically in the room at our meetings, but I didn’t really need them because their updates were already in AchieveIt.

As I mentioned before, I just used the filters, had an instant agenda, then took notes right on the cards as they were in view of everybody. We didn’t have just discussion; we actually got results in our meetings.

The bottom line, that’s good. No matter what type of plan you’re working on, if you can have half as many meetings and easily track and report status, that would be a win.

A conservative estimate of the savings after less than two months on this project was $5,000.

That was really just by putting time back on everyone’s calendars and meeting less.

But the CHI Health team hasn’t stopped there. Myra has started using AchieveIt to manage other types of projects. The results have been exponential, leveraging the tool’s automation and reporting elements.

I was challenged by my organization to try to stretch AchieveIt as a product every which way to see if it was a viable tool for future initiatives. I haven’t been able to find an area where it couldn’t be an appropriate solution.

Last week I built a plan and an accompanying dashboard in 12 minutes. It’s replacing 14 spreadsheets, each of which were formatted differently, each containing four or five key metrics. It’s pretty difficult to generate a system view when you have such a hodgepodge of items that you need to roll up and AchieveIt solves all of that for me.

I’m pleased to say we’ve now expanded to where every one of our campuses has either a strategic or operational plan in AchieveIt. We’re using it for initiatives related to growth, stewardship, engagement, and patient experience, just to name a few.

We’re using AchieveIt to replace a pretty manual, antiquated process we’ve been doing for quite some time before AchieveIt. It took about four hours every month to gather updates and revise a Word document.

After automating with AchieveIt, it now takes less than 15 minutes.

We also automated the report generation, so on the first of every month, a report is sent to the person who used to update the Word document.

And executing plans with agility has gotten way easier. Basically, all we have to do is add new items to the plan as they surface. AchieveIt automatically sends an email to the person accountable. So, with the help of this tool, we’re building a culture where it’s not acceptable to not reply when an update is needed.

“We’ve Matured Quite a Bit in Our Planning Process”

The CHI Health team has improved their process with the help of AchieveIt. For example, something that used to be ingrained throughout their organization, they’ve since removed goals that Myra calls, “motherhood and apple pie,” like, “Open the hearts and minds…” She says, “You can’t dashboard that.”

I used to do project management via Excel and I thought I had a pretty good process. It did, however, rely a lot on face-to-face meetings and I had to pull together the executive-level reporting manually every month.

AchieveIt has taken this up a level and I absolutely love the automation it’s provided me. We have dashboards for our executives that tell them the story at the highest level that they really are interested in getting, and its real time.

You know, I actually have an email from my boss’s boss, the CFO of the company, saying, “I LOVE THIS !!!!” with all capitals and a bunch of exclamation points. Since the dashboards are graphic in nature, executives can easily see trends of the different quality metrics that we’re keeping our eye on. Plus, the fact that it’s instantaneous when a person gives an update, they know right then. They aren’t waiting a week for the report to come to them that gets attached to an email that’s buried amongst the other couple hundred they’re getting that day. It’s right there, front and center. So, we’re building dashboards right and left all over the place with this product.

“AchieveIt Is My Best Friend, and I Think It Could Be Yours Too”

No matter what you’re undertaking, I feel you can use AchieveIt to help you have meaningful, focused meetings that actually accomplish something. No more hours and hours of discussion only. Staff know that they, and only they, are responsible for items to which they are assigned.

We’ve been pleased with the way AchieveIt has provided a solution to several of the struggles we were having and I’m confident that if it was a solution for us, it could be for you too.

Because of the uses I found for the product, I’ve been granted the title of AchieveIt Queen by my colleagues (chuckles).

Get Your Own AchieveIt Crown

Join Myra and other AchieveIt users in the plan management revolution by watching a 2-minute product demo video and requesting to talk to us today.

4 Steps to Complete a Gap Analysis

4 Ways to Develop Strategic Focus in Your Organization